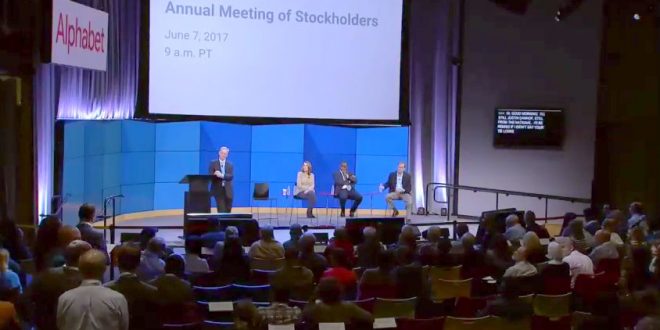 As I’ve reported several times in recent months, the right wing National Center for Public Policy Research is in the habit of appearing at shareholder meetings for major corporations to ambush top executives over their diversity programs and positions on social issues. Today one of their henchmen attacked executives at Alphabet/Google and things did not go well for him.

From their press release:

At today’s Alphabet Inc. shareholder meeting, a representative of the National Center for Public Policy Research’s Free Enterprise Project  (FEP) asked Alphabet and Google executives whether the company’s so-called commitment to diversity and inclusion extends to conservative- and libertarian-leaning employees, in light of the company’s steadfast opposition to much of President Donald Trump’s agenda and issues of interest to conservatives.

“I left today’s meeting with the feeling that Alphabet and Google are companies of, by and for liberals,” said National Center General Counsel and FEP Director Justin Danhof, Esq.   “It is hard to see how a conservative viewpoint would ever have a place in that corporate atmosphere.  During President Trump’s short tenure, the tech industry has aligned itself like an opposition party to much of the President’s agenda.  Today, Google and Alphabet essentially staked the claim as the leader of an anti-Trump and anti-conservative movement.”

“In response to my question, Alphabet Chairman Eric Schmidt flatly said that the company was not going to change,” noted Danhof.  “Like other tech companies that we have approached about their opposition to President Trump’s platforms, the company’s executives tried to deflect the question as one of policy and not politics.  However, in many of these cases this is a distinction without a difference.  Either way, the company is continually taking leftist policy positions, and no executives disputed that notion today.”

That reference to “decency legislation,” as you’ve surely guessed, is about the vicious anti-trans bill now due to heard in a special session called yesterday by GOP Gov. Greg Abbott.

You’ll likely enjoy the exchange below, which begins with this response to the bit about climate change: “We start with the principles of science at Google and at Alphabet.”