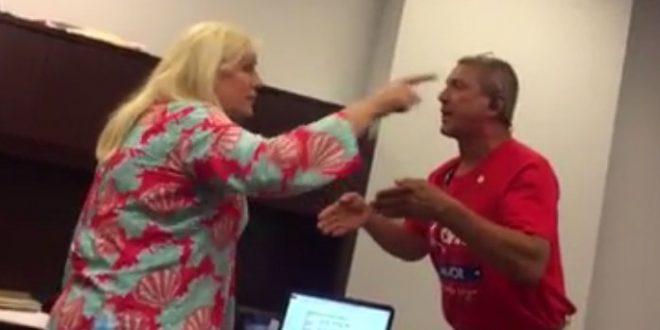 GOP City Councilman Screams At Campaign Worker: “You Wish You Were Getting Fucked By Me” [VIDEO]

A Passaic County Regular Republican Organization employee lodged a harassment complaint against a township councilman after a heated argument about campaign signs. The argument was recorded on multiple cellphones.

Susan Enderly, a Wayne resident and PCRRO employee, was completing paperwork on Sunday at the organization’s Wayne office when Republican Councilman Richard Jasterzbski entered. The two argued about campaign signs that had been removed from a window at the PCRRO headquarters at 1220 Hamburg Tpke., according to police reports.

In the video, recorded by Enderly and one of her daughters using cellphones, Jasterzbski is seen standing very close to Enderly, pointing at her while angrily making sexual comments and shouting expletives over five or six minutes.

When reached for comment, Jasterzbski said the argument was rooted in political signs at the PCRRO headquarters that were removed and replaced by Enderly and her family. Jasterzbski said a sign for Wayne mayoral candidate Lonni Miller Ryan had been removed and replaced by one for Lt. Gov. Kim Guadagno, who is on Tuesday’s gubernatorial primary ballot.

Previous Eric Trump: The Investigation Into Collusion With Russia Is Totally “The Greatest Hoax Of All Time” [VIDEO]
Next MSNBC Panel: Trump Is Mentally Unstable [VIDEO]