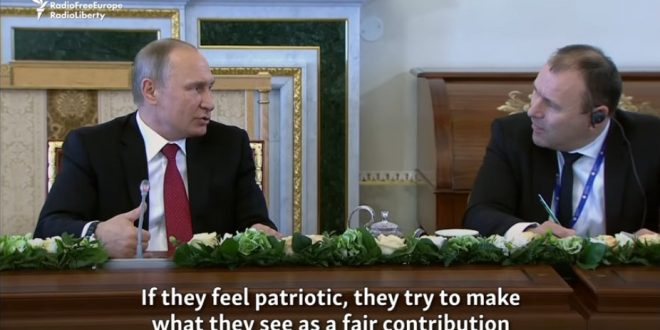 Shifting from his previous blanket denials, President Vladimir V. Putin of Russia said on Thursday that “patriotically minded” private Russian hackers could have been involved in cyberattacks last year to help the presidential campaign of Donald J. Trump.

While Mr. Putin continued to deny any state role, his comments to reporters in St. Petersburg were a departure from the Kremlin’s previous position: that Russia had played no role whatsoever in the hacking of the Democratic National Committee and that, after Mr. Trump’s victory, the country had become the victim of anti-Russia hysteria among crestfallen Democrats.

Raising the possibility of attacks by what he portrayed as free-spirited Russian patriots, Mr. Putin said that hackers “are like artists” who choose their targets depending how they feel “when they wake up in the morning.”

“If they are patriotically minded, they start making their contributions — which are right, from their point of view — to the fight against those who say bad things about Russia,” he added.

Previous Democrats Issue Pride Month Proclamation And Call On Trump To Pressure Other Nations To Protect LGBTs
Next Carter Page Evades Questions On Colluding With Russia, Claims Trump Is Standing Up For His “Civil Rights”