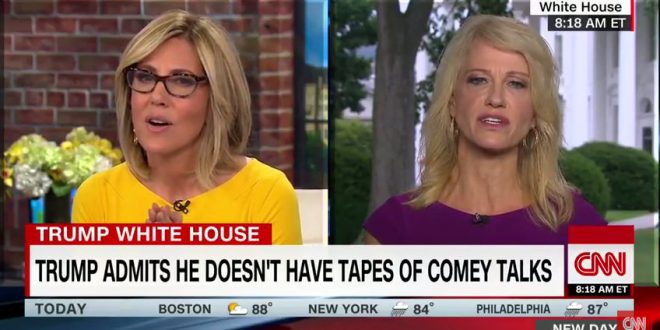 Propaganda Minister Conway Battles CNN Over Trump’s Lie About Tapes: “There Was No Charade” [VIDEO]

During a combative interview with CNN’s Alisyn Camerota, White House counselor Kellyanne Conway refused to say why President Donald Trump waited 42 days before admitting he did not have secret Oval Office tapes with ex-FBI director James Comey on them.

“Why did the president 42 days ago suggest that there might be audiotapes of his conversations with James Comey?” Camerota asked. “So the president made clear yesterday and in an interview aired early this morning, Alisyn, on Fox News, that he doesn’t have tapes — didn’t make tapes, but –,” Conway replied as the CNN host cut her off.

If you can bear it, the bit about the tapes starts at the 11-minute mark.