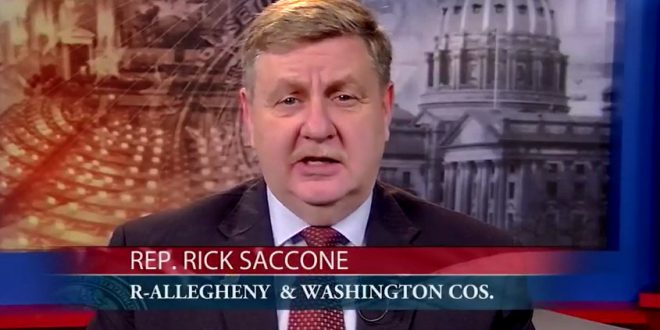 LGBT citizens are not protected under Pennsylvania’s Human Rights Act, but if this nutjob gets his way, gun owners will be. They’ll be able to bring guns to work and employers won’t be able to do a thing about it. The Pennsylvania Record reports:

Pennsylvania is considering making gun owners a protected class of citizens with proposed changes to the Pennsylvania Human Rights Act (PHRA). The new bill, which was introduced by two dozen Republican representatives and one Democrat, would prevent employers from discriminating against employees who own or carry firearms. House Bill 38 is currently in committee, but if it makes its way through the legislature, it could have a major impact on the workplace.

Current law allows employers, or any private property owners, to forbid guns on their property, even if those guns are lawfully owned and contained in private vehicles. Essentially, employers would have to treat gun ownership as they do disabilities and make sure that they treat employees who own and carry guns equal to those who need assistive devices such as wheelchairs.

And here’s why state Rep. Rick Saccone, the bill’s primary sponsor, is trying to make headlines.

Pennsylvania’s 2018 race for U.S. Senate is getting underway, with Monday’s entry of a fiery Republican state lawmaker from suburban Pittsburgh who has become known for his conservative and outspoken style in his six years in office.

Rick Saccone’s target is Democratic U.S. Sen. Bob Casey, the son of a late former governor and one of Pennsylvania’s best-known politicians. Saccone is little known in much of the state, but he is one the Legislature’s staunchest conservatives and is a backer of Republican President Donald Trump, which could help him in a primary.

A retired Air Force captain, Saccone, 59, is a frequent critic of the government and political deal-making, and his speeches on the House floor are often passionate and forceful. He is prominent in the fight to expand gun rights and the role of religion in public life, sometimes making waves, such as with legislation he sponsored to declare 2012 the Year of the Bible in Pennsylvania.

As I reported back in March, Saccone says he’s running for the US Senate because “God wants Christians to rule.” See the text of his gun bill here.