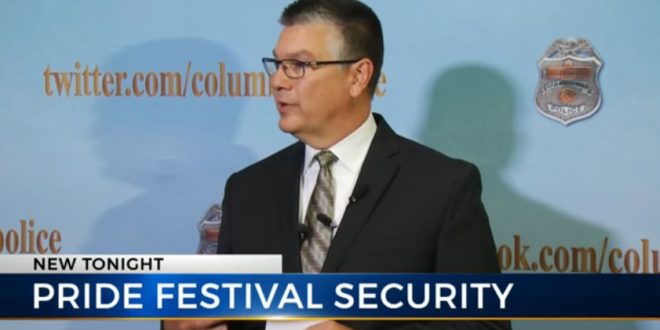 The Columbus Police Department and Homeland Security are looking into a Facebook post that called for the killing of LGBTQ people, ahead of this weekend’s Pride Festival. The post was made to a page dedicated to the event; the poster wrote, “I hope this event turns out like the Boston Marathon a few year’s (sic) back.” The post continues with, “All [LGBTQ people] should be killed or at least relocated.”

Thursday it was confirmed the poster was an employee of the Columbus City School district. The district responded to our inquiry by saying, “We have also been made aware of his inappropriate comments and are working to address the situation.” There has been no word on what disciplinary action has or will be taken; the employee appears to have used a personal Facebook account to make the comment. Columbus Police say they are looking into the post, and have informed Homeland Security which is now also getting involved.

More from the Columbus Dispatch:

A man who posted hateful comments about Saturday’s Stonewall Columbus Pride Festival and Parade likely will lose his job with Columbus City Schools. Chris Dodds, 48, is a garage assistant supervisor who has worked for the district since 2004. “Columbus City Schools values and celebrates its diversity. Please know that we are working with authorities to address this matter and his actions. We do not tolerate discrimination of any kind,” said Scott Varner, a spokesman for the school district. “We are currently working toward Mr. Dodds’ termination.”

Previous Gingrich: Presidents Are Immune From Obstruction Charges (Voted To Impeach Clinton For Obstruction)
Next One Million Moms Vs TGI Fridays