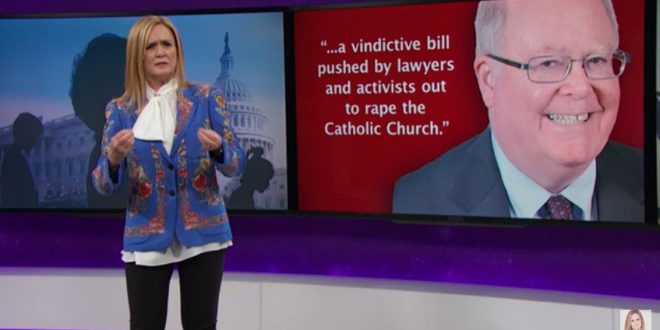 This year, the bill, called the Child Victims Act came closer than ever to passing. It received support across the aisle in both the Senate and Assembly. It passed in the Assembly for the first time since 2008. The bill died before it hit could the Senate floor.

Samantha Bee took a break from dragging the Trump administration during last night’s episode of Full Frontal with Samantha Bee to focus on more local issues. Specifically, she decided to discuss the Child Victims Act, a bill aimed at helping survivors of child sexual abuse in the state of New York.

Bee had one question: “Why have they been blocking this bill for 11 years?” The answer? Institutions such as churches and the Boy Scouts of America have lobbied pretty hard against the bill. In fact, New York’s Catholic Conference spent $2.1 million between 2007 and 2015 to lobby against several proposed measures, including the Child Victims Act.

So, why do these groups oppose the bill? Hoylman told Bee religious and youth organizations presumably fear that the passage of the Child Victims Act could potentially bankrupt them. Yep.

“I don’t know, I’m gonna go out on a limb here and say that if you’re an institution that has hurt so many children that paying out civil settlements would make you go bankrupt, maybe you should,” she said.

Watch all of the clip. Hoylman, by the way, is openly gay and has told me that his husband is a daily JMG reader.