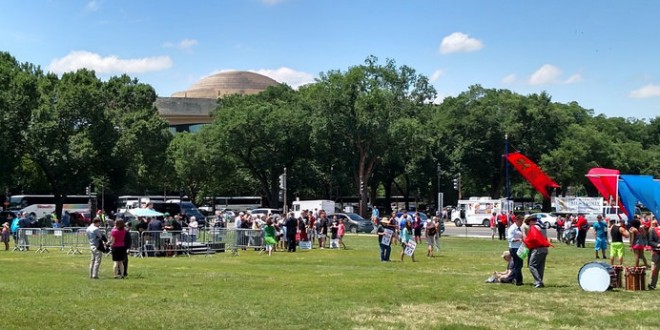 NOM Preps For Yet Another Humiliation [VIDEO]

As you can see by the photo above, last year NOM was humiliated when a massive crowd in the tens showed up in DC for their third annual anti-LGBT hate march. But definitely send them more money for next week’s embarrassment. Via email from hate group leader Brian Brown:

Joe — Someone asked me the other day why we are going to the time and trouble to expend substantial financial and human resources on the upcoming 2017 March for Marriage. It’s a good question, and I have a simple answer: Because we must.

We must continue the fight to restore marriage in our nation’s laws. We must provide legal protections for all those who believe in the truth of marriage as the union of one man and one woman. We must prevent politicians and the courts from redefining gender in the law. And we must demand that our constitutionally-guaranteed religious liberty right be protected and enforced.

The March for Marriage is a tremendously important opportunity for us, and we need your support to make it a success. Will you make an immediate financial contribution to help? Every dollar you give will be matched by a generous donor, doubling the impact of your gift.

The 2017 March for Marriage is so important, that today we are releasing a new video to promote the March, and to encourage Americans across the country to join us in Washington, DC on June 17th. Please watch the video now, and then share it with all your friends and family.

We’re honored to be co-sponsoring this year’s March for Marriage with Freedom’s Journal Institute for the Study of Faith and Public Policy, an organization focused on how African American families view matters of faith, race and public policy. We are looking forward to many of their members joining with us.

As important as the 2017 March for Marriage is, it unfortunately is happening at a time when our financial resources are low. We are asking you and all loyal NOM members to help with a generous financial contribution, which will be matched dollar for dollar as part of the Spring Financial Matching Campaign.

About that other group:

Freedom’s Journal Institute for the Study of Faith and Public Policy is based in Flossmoor, IL. It became a nonprofit in 2015 and filed a tax return by simple e-Postcard (revenues of less than $50,000). The group’s head is Eric M. Wallace. Wallace claims to have an earned PhD in biblical studies from Union Presbyterian Seminary. The seminary lists no doctoral programs. Who knows? Wallace has been an unsuccessful politician and noisemaker.