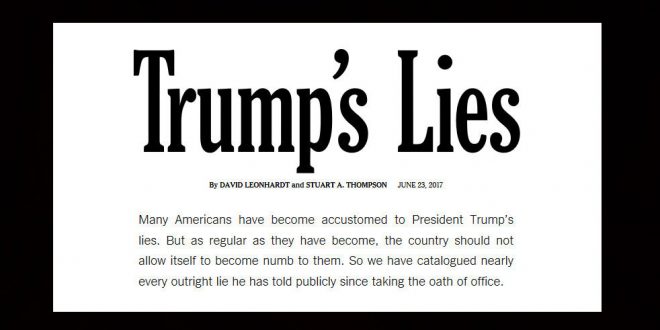 The New York Times has compiled a massive list called “Trump’s Lies,” in what they say catalogues “nearly every outright lie” President Trump has made since his January inauguration.

The Times‘s list, which ran in the paper’s opinion section, including his inaccurate claim that there was a terror attack in Sweden last February and his recent incorrect statement that the Paris Agreement isn’t non-binding.

The list also includes Trump’s claim that he has been on the cover of Time magazine more than any other person — a distinction actually held by former President Nixon. The Times feature says that Trump made “public lies or falsehoods” every day during his first 40 days in office.

From the opening to the New York Times story:

President Trump’s political rise was built on a lie (about Barack Obama’s birthplace). His lack of truthfulness has also become central to the Russia investigation, with James Comey, the former director of the F.B.I., testifying under oath about Trump’s “lies, plain and simple.”

There is simply no precedent for an American president to spend so much time telling untruths. Every president has shaded the truth or told occasional whoppers. No other president — of either party — has behaved as Trump is behaving. He is trying to create an atmosphere in which reality is irrelevant.

We have set a conservative standard, leaving out many dubious statements (like the claim that his travel ban is “similar” to Obama administration policy). Some people may still take issue with this standard, arguing that the president wasn’t speaking literally. But we believe his long pattern of using untruths to serve his purposes, as a businessman and politician, means that his statements are not simply careless errors.

We are using the word “lie” deliberately. Not every falsehood is deliberate on Trump’s part. But it would be the height of naïveté to imagine he is merely making honest mistakes. He is lying.

The Times follows each of Trump’s lies with a brief and scathing fact-check. Hit the link.