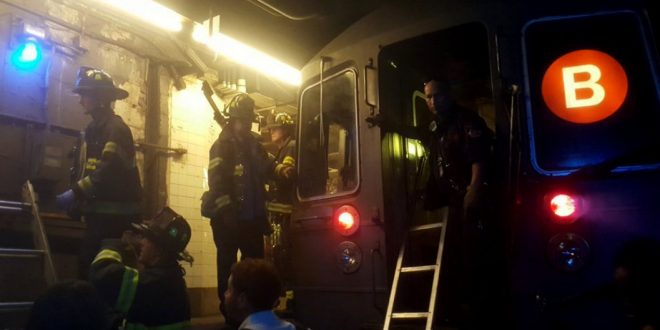 Two cars of a crowded subway train veered off the tracks Tuesday morning and crashed into a wall in northern Manhattan, injuring dozens of people and causing panic as riders evacuated and made their way through an underground tunnel to the nearest station.

Joseph J. Lhota, the newly named leader of the Metropolitan Transportation Authority, said the emergency brake had been activated, sending the train careening off the tracks, but he could not say why the brake had been deployed. He said all the injuries were minor.

Fire Commissioner Daniel A. Nigro said 34 people were being treated for minor injuries, including smoke inhalation, and 17 of them were taken to nearby hospitals. There were about 800 people in the tunnel after the accident, and it took more than an hour for all of them to get out, he said.

“I will vouch for reports that the train left the rails,” said Mary Hodges, who was on the A train. “No doubt. We were in the air. I’m pretty sure we scraped the sides of the tunnel wall. But I couldn’t swear it.”

“We were going fast and all of a sudden I felt this big bump, like it went up in the air and rocked side to side in the air, off the tracks,” said Carrie Courogen, of Washington Heights. “I flew up off my seat and onto the ground. It came to a screeching halt. We saw sparks. It smelled so bad, like burnt rubber.”

“A couple of people tried to open windows or doors to get out. We were just sitting there and no one tried to tell us over the intercom,” she added. “We had no idea what was going on. Finally after ten minutes the conductor gets on and she’s like, ‘We have a derailment, we’re coming through the cars.’ It was very terse.”

“I landed on my butt in the middle of the car, the lights went out and people freaked out,” said Ritch Duncan, 44. “There was a four foot gash in the floor. People were discussing getting on the tracks, others were warning of the third rail. The main things I was afraid of then were other people panicking and smoke which we started to smell.”

Updated information about service changes impacting B, D and M train service due to a derailment at 125 St. pic.twitter.com/nEgR8OUTVK

34 injured in A train #derailment, per @FDNY commish. Source says 2,000 evacuated from one A train, one C train & 2 D trains. #NY1Commute

Update: All disabled trains have been evacuated, passengers are above ground. MTA senior leadership on the scene to investigate the incident

Video taken by a passenger on the derailed A train this morning during evacuation. More starting at 4 @NBCNewYork #TrainPain4NY pic.twitter.com/hzMTCcwD9J

Previous TORONTO: Trump To Be Paid Millions By Hotel Owners Desperate To Wipe His Name From The Building
Next Major Ransomware Attack Hits Firms Worldwide