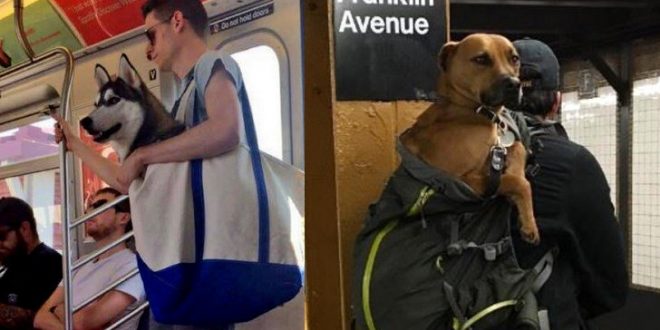 New York City’s Metropolitan Transit Authority is dog-friendly — to a point. Leashed service and emotional support animals are allowed to ride with their owners with no other restrictions, but all other pet dogs wanting to ride the rails need to be brought on in a carrier.

For pup parents with smaller dogs, this is a cinch. There are plenty of portable purses and bags that are perfectly sized for small to medium dogs, but for the bigger pups it starts to get tricky. While some large dog owners may have abandoned the idea of their pet legally riding the subway, others have gotten creative.

The new carrier rule actually went into effect back in October, but for some reason either enforcement or publicity for the law stepped up in recent days.

the New York City Subway banned dogs unless they fit in a bag and the people of New York did not disappoint. pic.twitter.com/vluNcZHBmW

they get an E for Effort. pic.twitter.com/N3Eu08gqNm

NYC's subway rule: No dogs allowed unless animal fits in a carrier or bag. That didn't stop these New Yorkers https://t.co/XqQI2S67i2 pic.twitter.com/QVVNtD1vQX