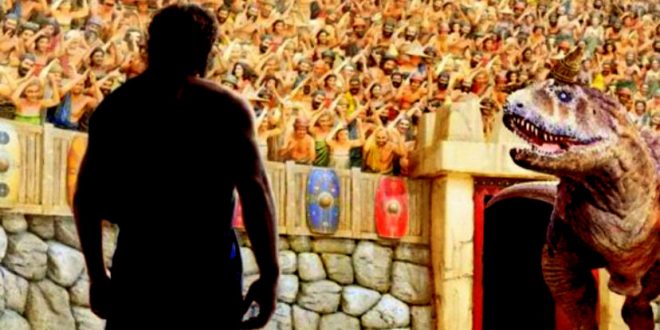 Remember in the Bible when Noah battled a dinosaur in an arena? Answers in Genesis does. Or at least they have no problem promoting it in a book about how “God shapes [Noah] into the man who eventually saves humanity’s future.”

I would tell you this is a work of fiction… but isn’t everything on their site? It’s also not the only Creationist reference to biblical characters fighting dinosaurs. Ken Ham has an entire diorama in Ark Encounter showcasing a battle between humans, giants, and dinosaurs. Because science.

From the book’s description:

As wickedness increases across the land, Noah and his loved ones endure painful consequences of a world bent on evil. King Lamech expands his rule through deception and force, but does his kindness toward Noah hint that things may change?

Noah and Emzara explore their world and their eyes are opened anew to the creative genius of the Most High, yet mankinds’s wretchedness threathens to upend their peaceful corner of the world. While tracking down the perpetrator of a malicious crime, they are tested by tragedy and must decide if they will sacrifice everything for truth and justice.

After years of serving God, Noah reaches crisis of faith due to his mounting frustrations with the proliferation of sin and the apparent silence from the Creator. Thrust into a series of perilous situations, Noah’s deepest convictions are challenged. His response will direct his course and change the world forever.

More than just a novel, Noah: Man of Resolve features non-fiction sections in the back of the book that provide answers to popular questions about the time in which Noah lived and explain where certain characters and events from the book can be seen at the Ark Encounter in Williamstown, Kentucky.