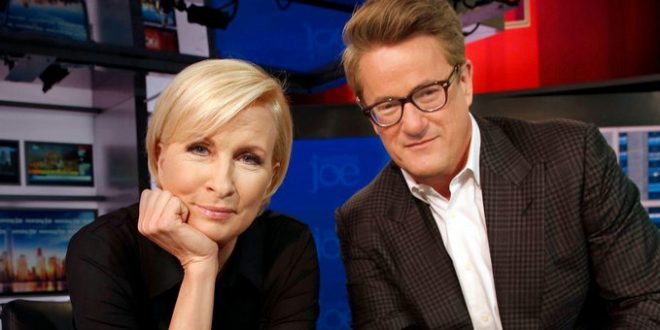 MSNBC’s Morning Joe team blasts back in a WaPo op-ed:

President Trump launched personal attacks against us Thursday, but our concerns about his unmoored behavior go far beyond the personal. America’s leaders and allies are asking themselves yet again whether this man is fit to be president. We have our doubts, but we are both certain that the man is not mentally equipped to continue watching our show, “Morning Joe.”

The president’s unhealthy obsession with our show has been in the public record for months, and we are seldom surprised by his posting nasty tweets about us. During the campaign, the Republican nominee called Mika “neurotic” and promised to attack us personally after the campaign ended.

This year, top White House staff members warned that the National Enquirer was planning to publish a negative article about us unless we begged the president to have the story spiked. We ignored their desperate pleas. Mr. Trump claims that we asked to join him at Mar-a-Lago three nights in a row. That is false. He also claimed that he refused to see us. That is laughable.

The president-elect invited us both to dinner on Dec. 30. Joe attended because Mika did not want to go. After listening to the president-elect talk about his foreign policy plans, Joe was asked by a disappointed Mr. Trump the next day if Mika could also visit Mar-a-Lago that night. She reluctantly agreed to go.

After we arrived, the president-elect pulled us into his family’s living quarters with his wife, Melania, where we had a pleasant conversation. We politely declined his repeated invitations to attend a New Year’s Eve party, and we were back in our car within 15 minutes.

Mr. Trump also claims that Mika was “bleeding badly from a face-lift.” That is also a lie. Putting aside Mr. Trump’s never-ending obsession with women’s blood, Mika and her face were perfectly intact, as pictures from that night reveal.

And though it is no one’s business, the president’s petulant personal attack against yet another woman’s looks compels us to report that Mika has never had a face-lift. If she had, it would be evident to anyone watching “Morning Joe” on their high-definition TV.

.@morningmika: “It’s been fascinating and frightening and really sad for our country” #morningjoe pic.twitter.com/Ch9fekp905