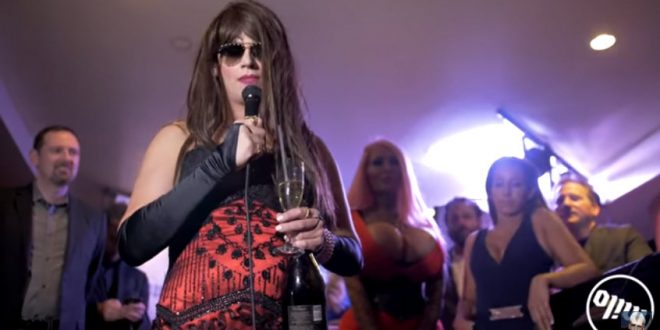 Flanked by a freakishly busted woman, Milo addressed the crowd in drag at one point, spewing his usual tired tropes about leftist gays and spurring his sycophants to chant “build that wall” and “lock her up.” Ho-hum, how boring. Milo’s book currently ranks at #26 on Amazon’s bestsellers list and is due out on July 4th.

Thanks to all who came to our Coming Out Conservative party last night. These are my new bosses. pic.twitter.com/1kporf4Fhw

Hanging with @milo.yiannopoulos at the "Coming Out Conservative" party he held at La Reve for #gaysfortrump and #themodernpatriots to party with all who were and are excluded from #prideparade but it's boring without us so have your parade and we will be the rain! 🇺🇸🇺🇸🇺🇸 #maga #milo #patriot #usa #pridemonth #pride #trump #milosfagbash