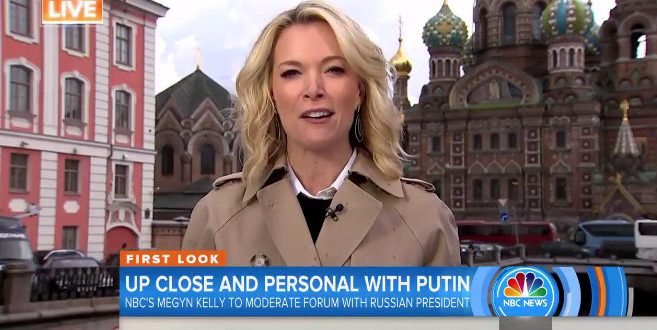 It’s official: Megyn Kelly will interview Vladimir Putin one-on-one for the first episode of her Sunday night NBC series. Kelly herself made the announcement on NBC’s Today Thursday morning, reporting live from Russia.

Kelly is moderating the plenary session of an economic forum in St. Petersburg on Friday (June 2), where Putin will be one of the panelists, and her team had hoped to land a one-on-one interview with the Russian president.

On Thursday, Kelly announced that Putin had agreed to sit down with her at the end of the forum. The interview will air on the debut episode of her new newsmagazine show, Sunday Night With Megyn Kelly, which premieres on June 4 at 7 p.m. ET.

Just learned this morning Vladimir Putin will sit down one-on-one with me tomorrow after the forum. Exclusive interview Sunday 7/6c on NBC pic.twitter.com/a4NydtzcSc

Previous How Jared Kushner’s Company Exploited A Program Meant For The Poor To Build Another Luxury Complex
Next MICHIGAN: Hate Group Sues On Behalf Of Wedding Venue After They Refuse To Host Same-Sex Events