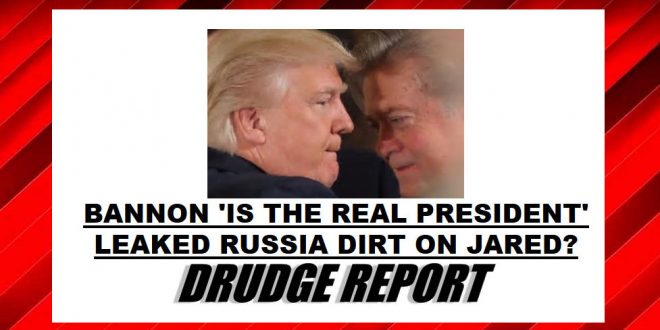 Homocon blogger Matt Drudge this afternoon appeared to turn on Steve Bannon with a headline which links to reports on MSNBC host Joe Scarborough’s claim that Bannon is the White House leaker and the “real president.” An excerpt:

“Steve Bannon has been leaking – I believe, based on everything that I’ve heard – has been leaking these stories,” Scarborough said. “People very close to Steve Bannon were telling me before the stories were leaked that he was going to be leaking these stories. Two days after I heard this – two days! – [there was a] front-page New York Times story about the links between Kushner and Russia,” he added. “A coincidence? Absolutely not.”

Previous Creationist Ken Ham: There Are No Black People
Next Jim Bakker: God Told Me That The Closure Of Ringling Brothers Circus Is A Sign Of The End Times [VIDEO]