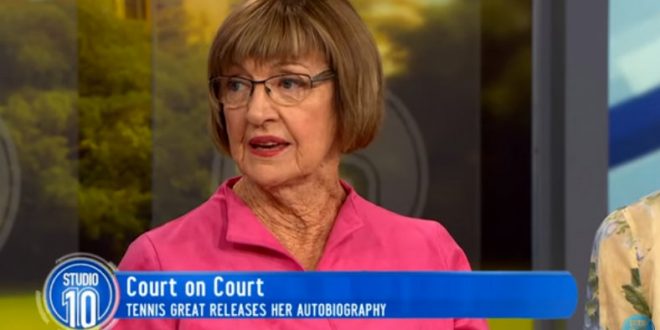 Margaret Court: US Gays Are Conspiring Against Me

Tennis great Margaret Court believes there is a “conspiracy” from the “US gay lobby” to strip her name from one of the Australian Open stadiums. The 74-year-old has been criticised for her beliefs on same-sex marriage, with 18-time Grand Slam champion Martina Navratilova calling for the Margaret Court Arena to be renamed.

“They have a lot of money behind them,” Court told 3AW radio. Court won 24 Grand Slam titles, 11 in the Open era, which began in 1968. Regarding calls for the stadium in her honour to be renamed, she said: “I think I’ve won more Grand Slams than any man or woman and if it is [renamed], I don’t believe I deserve it.

“They could probably get 100,000 petitions in 24 hours because that’s how they work. There’s a lot of money behind it, and it’s coming from America.” And asked about a possible conspiracy, she added: “Yes, I believe there is… I think the [gay] lobby, yeah.”

Earlier this week Court declared that gays are like Hitler, trans kids are possessed by Satan, and tennis is “full of lesbians.”

Previous Putin On Hacking Charges: It’s Like Anti-Semitism When People Say “The Jews Are To Blame” [VIDEO]
Next STOP IN THE NAME OF JESUS: Kentucky Governor To Launch Roaming Prayer Groups To Battle Urban Crime