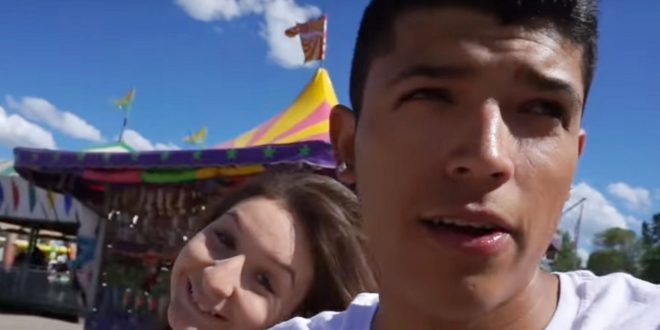 Over the past several weeks, Monalisa Perez of Halstad, Minn., and her boyfriend, Pedro Ruiz III, began their quest for YouTube fame by creating and posting videos of mostly harmless pranks: Mr. Ruiz climbing onto a tenuous tree branch and falling a short distance, or Ms. Perez feeding him a doughnut covered in baby powder rather than powdered sugar.

On Monday evening, the couple suddenly upped the ante when, the authorities say, Ms. Perez, 19, shot at a thick book that Mr. Ruiz, 22, was holding, apparently believing that the bullet would not make it through the volume. But the high-risk stunt went horribly wrong: The bullet entered Mr. Ruiz’s chest and he died at the scene.

“I really have no idea what they were thinking,” Sheriff Jeremy Thornton of Norman County said in a telephone interview late Wednesday. “I just don’t understand the younger generation on trying to get their 15 minutes of fame.”

Monalisa Perez, of Halstad, was charged Wednesday with second-degree manslaughter in the death of Pedro Ruiz III. Perez, who is pregnant, was released on $7,000 bail. The charge carries a maximum penalty of 10 years in prison.

Primeau said Ruiz liked guns and had “plenty” of them. Authorities say Perez used a .50-caliber Desert Eagle pistol in the stunt, which is described by retailer Cabela’s in an online ad as “one of the world’s most powerful semiautomatic handguns.”