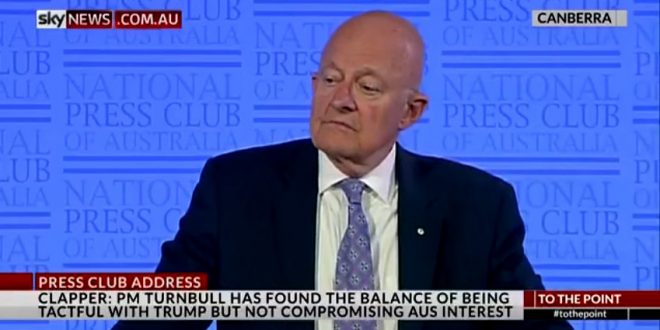 James Clapper: Watergate “Pales In Comparison” To What The US Is Currently Going Through [VIDEO]

The situation in Washington has become more serious than during the Watergate scandal, and investigators must get to the bottom of ties between the Trump administration and Russia, the former director of U.S. national intelligence said Wednesday.

In a speech to Australia’s National Press Club, James Clapper said allegations that President Donald Trump shared intelligence with Moscow were “very problematic” and that the Watergate scandal, which led to President Richard Nixon’s resignation in 1974, “pales” in comparison.

“I lived through Watergate. I was on active duty then as a young officer in the Air Force, and it was a scary time. But it was against the backdrop of all the post-Vietnam trauma, which seemed, at least in my memory, amplified the crisis in our system with Watergate.”