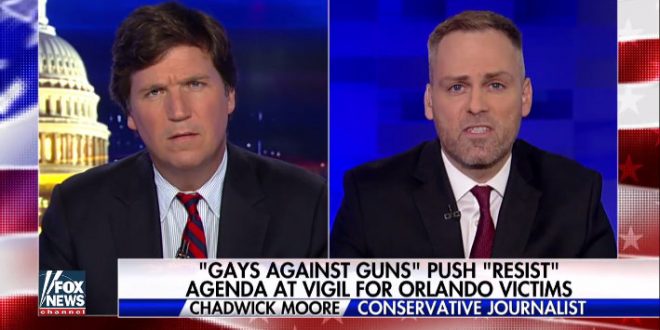 Homocon Chadwick Moore On Fox: Most Gay People Only Care About Pop Music And The Beach [VIDEO]

Homocon nutjob Chadwick Moore appeared on Fox News on Tuesday night to denounce the Gays Against Guns rally held at the Stonewall Inn to mark the anniversary of the Pulse massacre and tell some lies about Donald Trump, whom he claimed rushed to Orlando after the attack. Which, of course, never happened. Via Gay Times:

After describing the Stonewall Inn as “the [gay] equivalent of Mecca for Muslims”, Moore complained that some of those in attendance began protesting laws that allowed the shooter to easily get access to guns. “Most gay people aren’t political,” Moore claimed. “Most gay people, you know, they care about pop music and going to the beach. They probably don’t even know what the Second Amendment is.

“So they show up to be together, to celebrate the community and to mourn together, and instead they’re just fed this anti-gun nonsense.” Moore also criticised the anti-Trump sentiments expressed by those at the vigil, claiming it didn’t make sense for LGBT+ people to treat him as “the bad guy in the room” given that he visited Pulse nightclub just days after the shooting.

It's a family show, so I couldn't say "dick and meth." https://t.co/Asnoek8LsB

If u are a NYC-area LGBT conservative and feel left out by Pride, send me a DM w HOMOCON at top. We've got a treat for you (extreme vetting)