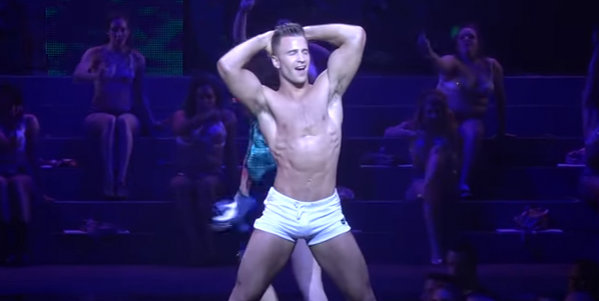 The clips may not be work-friendly. Playbill reports:

Broadway Bares: Strip U, the 27th edition of the annual burlesque-style fundraiser in New York, earned $1,568,114, a jump from last year’s $1,482,724 for Broadway Cares/Equity Fights AIDS, but slightly down from 2015’s record-breaking total of $1,598,501. Attendees watched 181 of the hottest male and female dancers in New York City—joined by a slate of special guests—performing with an absolute minimum of costuming.

For the fifth year in a row, Nick Kenkel manned the director’s chair for Broadway’s biggest, barest burlesque show, which offered a university-themed show. The 2017 edition of the fundraiser was presented June 18 at the Hammerstein Ballroom in midtown Manhattan for two performances, 9:30 PM and midnight.

In keeping with the college theme, Strip U began with Orientation and ended with Graduation, which bookended 10 lascivious “classes.” The show was framed by a blue-nosed inspector from the U.S. Department of Education—bearing the curious name Dick Hunter—who kept snooping for reasons to eliminate Strip U’s federal funding.

I took the second video below during the “Rotation” portion at the show’s conclusion when the dancers crowd the edge of the stage so that the audience can tip them. All tips go to Broadway Cares.

UPDATE: You’ll definitely want to head over to Boy Culture for Matthew Rettenmund’s many, many scorchingly sexy up-close photos and gifs from the event.