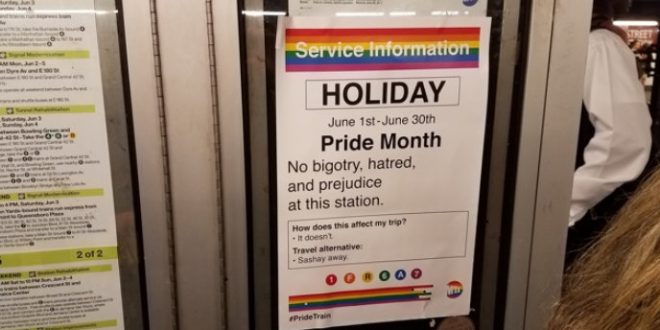 Thomas Shim said he and his collaborators were inspired to pepper the subway with guerrilla Pride Month posters when President Donald Trump declined to formally acknowledge the month’s significance on June 1st.

“It hit us hard the day of pride month, and President Trump not acknowledging it,” Shim told Gothamist on Monday. “Pride month is not something that just happened last year. It’s been happening every year, and it’s just not right [to ignore it].”

And while the group didn’t contact the MTA for permission, Shim says he’s grateful for the lack of pushback. “We work in advertising, so we have an understanding of how it is to go through clients,” Shim said. “We’re thankful of MTA for not giving us any trouble so far and we’re more than happy to work directly with MTA for future project.”

Unofficial Subway Posters Welcome All Aboard The ‘Pride Train’ This Month https://t.co/NNfgQg8dMy pic.twitter.com/z82vTpgAHJ

Previous Arab States Sever Ties To Qatar Over Terrorism
Next AP Fact Check: Donald Trump Can’t Be Counted On To Give Accurate Information To Americans During A Crisis