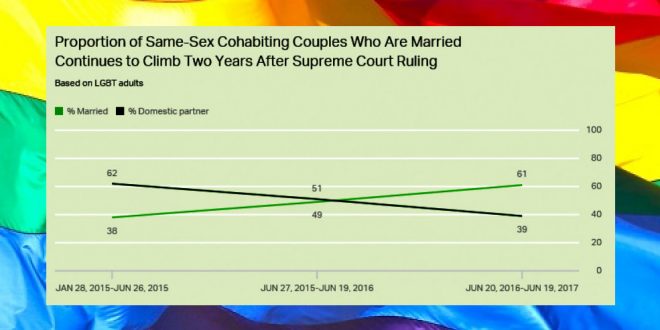 Two years after the Supreme Court ruled in Obergefell v. Hodges that states could not prohibit same-sex marriages, 10.2% of lesbian, gay, bisexual or transgender (LGBT) adults in the U.S. are married to a same-sex spouse. That is up from 7.9% in the months prior to the Supreme Court decision in 2015, but only marginally higher than the 9.6% measured in the first year after the ruling.

As a result of these shifts, Gallup estimates that 61% of same-sex, cohabiting couples in the U.S. are now married, up from 38% before the Supreme Court legalized same-sex marriage in June 2015, and 49% one year ago.