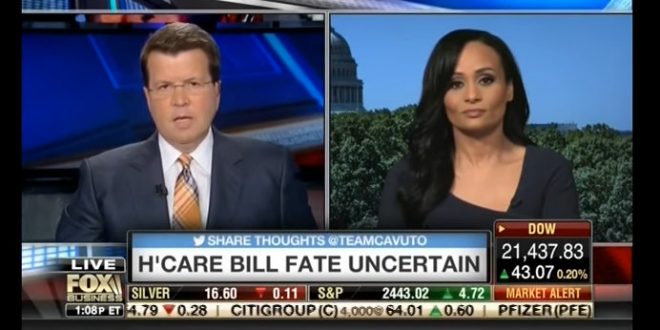 Responding to news that a Super PAC sponsored by supporters of President Donald Trump is running ads against Sen. Dean Heller (R-NV) for opposing Trumpcare, Fox News host Neal Cavuto got into a squabble with Trump booster Katrina Pierson.

It was when Pierson accused Heller of “governing as a Democrat” that Cavuto really dug in. “He’s looking at something that isn’t markedly different than the one it replaces,” he said, referring to complaints that Trumpcare is “Obamacare-lite.”

“You’re already threatening the guy, saying ‘if you go ahead with this we’re gonna primary your ass,’” he said. “This is a vote to move the process forward, this is not the actual plan that’s going to be in place,” she claimed.

Were you missing Katrina’s babbling double-talk? Watch below and get your fill.