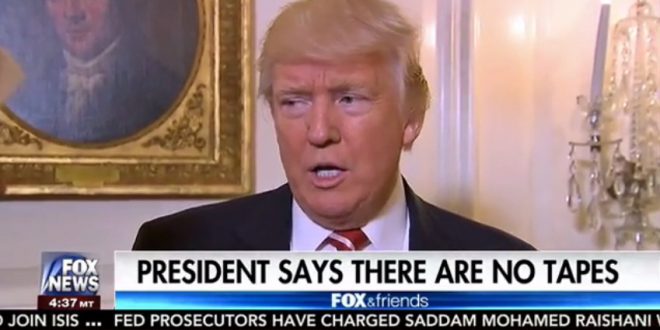 Media Matters has the transcript of the Fox & Friends interview that aired this morning:

AINSLEY EARHARDT (CO-HOST): Big news today. You said you didn’t tape [former FBI Director] James Comey. Do you want to explain that? Why did you want him to believe you possibly did that?

PRESIDENT DONALD TRUMP: Well I didn’t tape him. You never know what’s happening when you see that the Obama administration, and perhaps longer than that, was doing all of this unmasking and surveillance.

And you read all about it and I’ve been reading about it for the last couple of months about the seriousness and horrible situation with surveillance all over the place. And you’ve been hearing the word “unmasking,” a word you probably never heard before.

EARHARDT: That was a smart way to make sure he stayed honest in those hearings.

TRUMP: Well, it wasn’t very stupid, I can tell you that. He did admit that what I said was right. And if you look further back, before he heard about that, I think maybe he wasn’t admitting that, so, you’ll have to do a little investigative reporting to determine that. But, I don’t think it’ll be that hard.