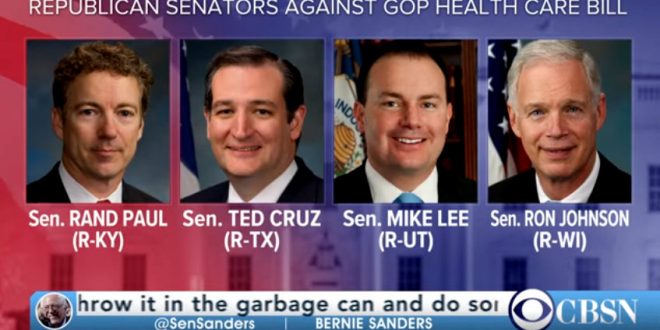 Four conservative Republican senators announced Thursday that they opposed the current version of GOP Senate leadership’s health care bill as written. Sens. Rand Paul of Kentucky, Ron Johnson of Wisconsin, Ted Cruz of Texas and Mike Lee of Utah said in a joint statement they’re “not ready to vote for this bill.”

“Currently, for a variety of reasons, we are not ready to vote for this bill, but we are open to negotiation and obtaining more information before it is brought to the floor,” the senators said. “There are provisions in this draft that represent an improvement to our current health care system, but it does not appear this draft as written will accomplish the most important promise that we made to Americans: to repeal Obamacare and lower their health care costs.”

Republicans can only lose two members of their 52-senator caucus in order to pass their proposal to repeal and replace Obamacare. In a 50-50 outcome, Vice President Mike Pence would provide the tie-breaking vote. A number of other GOP senators are avoiding outright supporting the new health care bill unveiled by Republican leaders Thursday morning — saying they need more time to read the fine print before taking a stand.