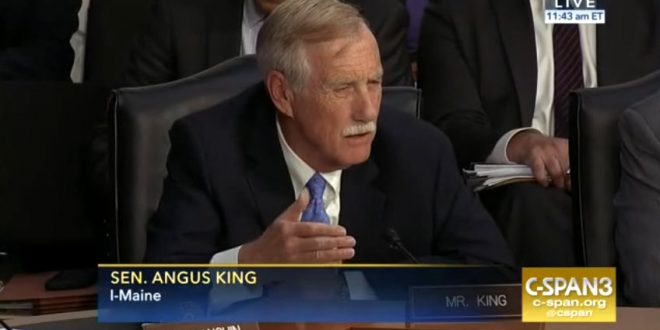 Senator Angus King (I- ME) grilled the intel chiefs testifying before the Senate Intelligence Committee today about why they weren’t answering any of the questions being posed to them.

A few minutes prior, Senator Martin Heinrich (D- NM) asked acting FBI director Andrew McCabe about conversations he’s had with James Comey about his conversations with President Trump. McCabe said he would not answer. So King asked McCabe, “Why not? Do you not remember them?”

McCabe said that wouldn’t be appropriate, and King grilled him for a little longer before turning to NSA chief Mike Rogers and Director of National Intelligence Dan Coats. King demanded to know why they won’t directly answer the questions about their conversations with the President of the United States. Rogers said, “I feel it is inappropriate.”

Again and again today at the hearing of the Senate Intelligence Committee, Director of National Intelligence Daniel Coats and National Security Agency Director Adm. Michael Rogers refused to answer direct questions as to whether they had been asked by the president to interfere with the information.

In response to Sens. Marco Rubio (R-Fla.), Susan Collins (R-Maine), Martin Heinrich (D-N.M.) and Angus King (I-Maine), they said they did not feel “pressured” and/or “directed” but declined to say whether they were asked. FBI acting director McCabe also refused to say if he had conversations with former FBI director James B. Comey about his conversations with the president.

And then Deputy Attorney General Rod J. Rosenstein refused to explain how and why Attorney General Jeff Sessions un-recused himself and whether he understood his memo would be used to fire Comey. None of these witnesses invoked executive privilege or national security. They just didn’t want to answer.