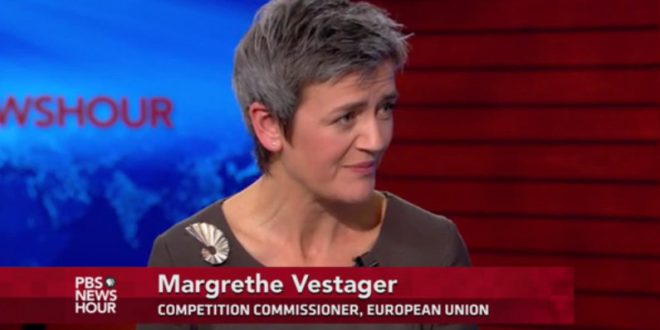 EU antitrust regulators hit Alphabet unit Google with a record 2.42-billion-euro ($2.7 billion) fine on Tuesday, taking a tough line in the first of three investigations into the company’s dominance in searches and smartphones.

It is the biggest fine the EU has ever imposed on a single company in an antitrust case, exceeding a 1.06-billion-euro sanction handed down to U.S. chipmaker Intel in 2009.

The European Commission said the world’s most popular internet search engine has 90 days to stop favoring its own shopping service or face a further penalty per day of up to 5 percent of Alphabet’s average daily global turnover.

The fine, equivalent to 3 percent of Alphabet’s turnover, is the biggest regulatory setback for Google, which settled with U.S. enforcers in 2013 without a penalty after agreeing to change some of its search practices.

Via press release from the European Commission:

Evidence shows that even the most highly ranked rival service appears on average only on page four of Google’s search results, and others appear even further down. Google’s own comparison shopping service is not subject to Google’s generic search algorithms, including such demotions.