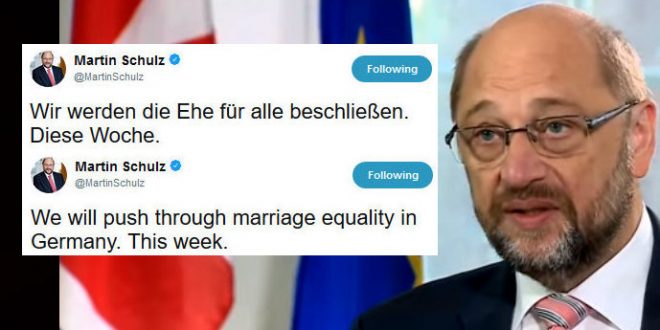 German lawmakers will decide Friday whether to legalize same-sex marriage, according to CNN affiliate NTV. The snap vote comes after Chancellor Angela Merkel said Monday that she would like to see parliament move towards a “vote of conscience” on the issue.

Following Merkel’s comments, German politicians writing on Twitter called for a vote to be held as soon as possible. Martin Schulz, leader of the Social Democratic Party (SPD) — the second largest party in parliament — called for parliament not to wait until after the federal election in September. “We will push through marriage equality in Germany,” he tweeted. “This week.”

The vote is likely to pass with strong support from other German parties and from some lawmakers within Merkel’s CDU. Volker Kauder, leader of the parliamentary group of the ruling CDU faction, called Tuesday for CDU members voting for and against the law to show respect for each other’s position, according to NTV. But he also warned that such a sudden vote could lead to a “hasty decision.”

We will push through marriage equality in Germany. This week.