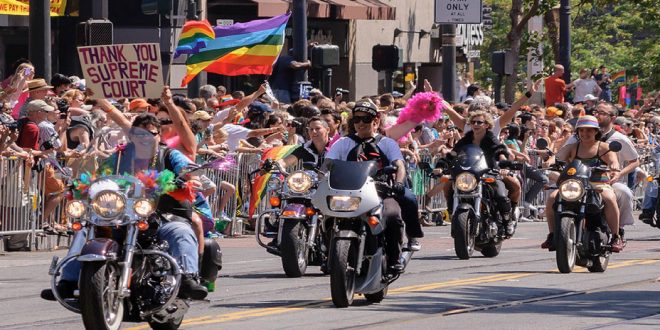 San Francisco “Dykes on Bikes” is celebrating Monday’s unanimous 8-0 United States Supreme Court Trademark decision, in which the Court found it unconstitutional to prohibit registration of a trademark by the United States Patent Trademark Office (USPTO) based on what some may consider “disparaging language.”

The organization was able to trademark its name after a 4-year battle all the way to the US Supreme Court, but its later application to register the logo was again refused on “disparagement” grounds.  Their logo trademark application was suspending by the USPTO pending the outcome of the Slants (Matal vs. Tam) case.  The name, Dykes on Bikes, has been used for over 40 years, since the group’s formation.

The women’s motorcycle contingent is revving up to lead the annual Pride Parade in downtown San Francisco this Sunday, while the group’s attorney immediately filed a request with the USPTO asking the agency to expedite registration of the “Dykes on Bikes” logo.

The New York Times reports on the ruling:

In a decision likely to bolster the Washington Redskins’ efforts to protect their trademarks, the Supreme Court on Monday ruled that the government may not refuse to register potentially offensive names.

A law denying protection to disparaging trademarks, the court said, violated the First Amendment. The decision was unanimous, but the justices were divided on the reasoning.

The decision, concerning an Asian-American dance-rock band called the Slants, was viewed by a lawyer for the Washington Redskins as a strong indication that the football team will win its fight to retain federal trademark protection. Lisa S. Blatt, a lawyer for the team, said the decision “resolves the Redskins’ longstanding dispute with the government.”

“The Supreme Court vindicated the team’s position that the First Amendment blocks the government from denying or canceling a trademark registration based on the government’s opinion,” she said.

PHOTOS: The images above and below are from the Dykes On Bikes website and are credited to “In Sappho We Trust.” That “thank you” sign in the top image is likely from 2015 after the Obergefell ruling and not related to this week’s decision.

Previous Catholic Bishop Decrees No Funerals Or Last Rites For Married Gays Unless They Repent On Their Deathbed
Next COLORADO: Mike Pence Tells Anti-LGBT Hate Group They Have An “Unwavering Ally” In Trump [VIDEO]