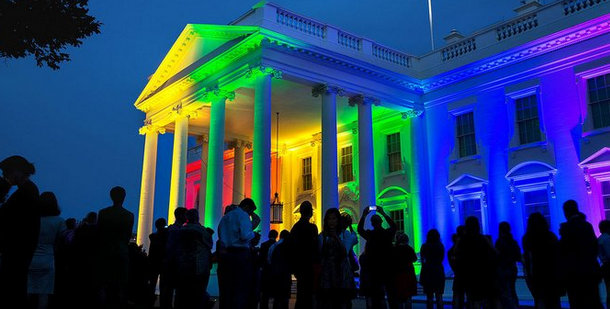 One year ago today President Obama issued his final LGBT Pride Month proclamation. We’re not holding our breath for any recognition from the current White House, but the Democrats have come through. From DNC chairman Tom Perez:

“From Stonewall to the Supreme Court, our nation has made great strides in LGBTQ rights. LGBTQ Pride Month is an opportunity to celebrate that progress, to appreciate the cultural achievements of LGBTQ Americans, and to recommit ourselves to the fight for global LGBTQ equality.

“Under the leadership of Barack Obama, America has advanced LGBTQ rights in ways unthinkable just a few years ago. This month, we celebrate the second anniversary of nationwide marriage equality. We ended Don’t Ask Don’t Tell and guaranteed transgender veterans the care they earned serving our nation. Today, hospitals receiving Medicare or Medicaid funds must extend visitation rights to LGBTQ patients. Across the country, violence against LGBTQ individuals can be prosecuted as federal hate crimes. These were hard-fought victories, but there is still much progress to be made.

“From bathrooms to boardrooms, too many LGBTQ Americans are denied the full equality they deserve. In some states, conservative lawmakers continue to advance legislation intended to discriminate against the LGBTQ community. Despite their promises, the Trump administration is hell-bent on rolling back progress, starting with Attorney General Jeff Sessions’ decision to end protections for transgender students. Democrats will fight those these efforts to erode the rights of LGBTQ people and continue to push for LGBTQ equality at home and abroad.

“Internationally, equality is also a long way away. According to the International Lesbian, Gay, Bisexual, Trans and Intersex Association, people in 72 countries can still be prosecuted for who they love. That is unacceptable. President Trump must use the full influence of the United States to pressure our neighbors to recognize the rights of LGBTQ people.

“However, there also are many reasons to be hopeful this Pride Month. Last Wednesday, Taiwan’s constitutional court  ruled in favor of same-sex marriage,  paving the way for Taiwan to become the first Asian country to legalize gay marriage. Hopefully, Taiwan’s landmark court decision is the beginning of LGBTQ equality across Asia.

“This month, we must redouble our efforts to fight for the rights of our LGBTQ family, friends, and neighbors around the world, especially those under threat from their own governments.”

Previous MICHIGAN: Hate Group Sues On Behalf Of Wedding Venue After They Refuse To Host Same-Sex Events
Next Putin Flip-Flops On Hacking Denials, Says “Patriotically Minded” Private Russians Might Have Done It [VIDEO]