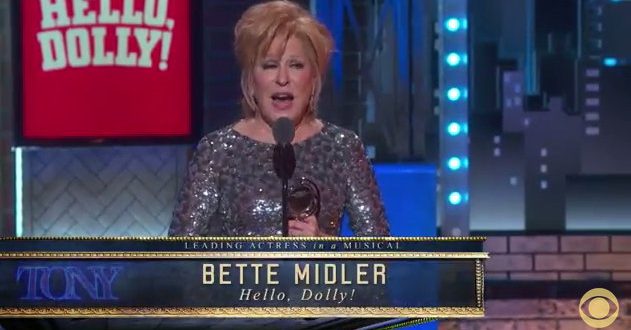 “Dear Evan Hansen” was the big winner at the 2017 Tony Awards, broadcast live from New York’s Radio City Music Hall on Sunday, walking off with awards for best musical and lead actor as well as actress nods for Ben Platt and Rachel Bay Jones.

Broadway veteran Cynthia Nixon picked up her second Tony award for featured actress for her role in Lillian Helmann’s “The Little Foxes.” Nixon thanked Laura Linney and fellow cast members before getting political.

Bette Midler won for best leading actress in a musical for her portrayal of Dolly Gallagher Levi in “Hello, Dolly!” giving an incredibly long acceptance speech in which she thanked everyone, including “all the Tony voters, many of whom I actually dated.”

See the full list of winners at the link.