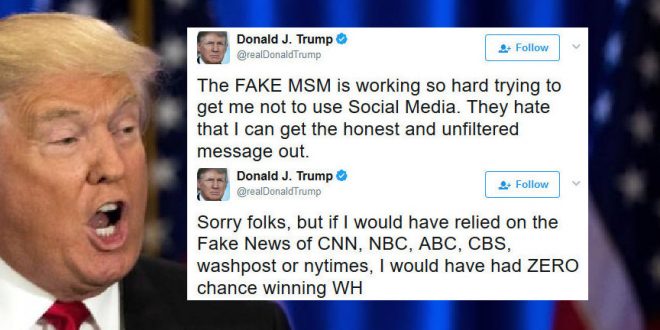 President Trump on Tuesday attacked the media, saying reporters “hate” his use of social media and criticizing election analysts that predicted he would lose. Trump often tweets his criticism of the media, decrying coverage of the investigations into Russian election interference as “fake news.”

Deputy Press Secretary Sarah Huckabee Sanders said Monday that no one in the White House vets Trump’s tweets. Trump sent out a series of tweets Sunday and Monday criticizing the mayor of London after a terror attack in the city, and touting his “travel ban” on individuals from six majority-Muslim countries.

The FAKE MSM is working so hard trying to get me not to use Social Media. They hate that I can get the honest and unfiltered message out.

Sorry folks, but if I would have relied on the Fake News of CNN, NBC, ABC, CBS, washpost or nytimes, I would have had ZERO chance winning WH