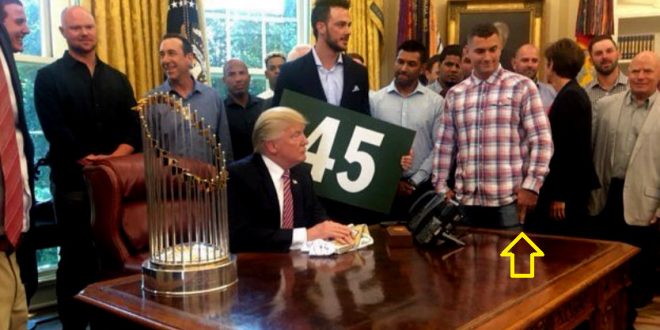 During the Cubs visit to the White House on Wednesday, Albert Almora Jr. was photographed next to the president in the Oval Office. At first glance, everything appears normal. But many people on social media, on closer examination, spotted the Cubs outfielder appearing to give President Donald Trump the middle finger. When asked about it later, Almora denied to the Chicago Sun-Times that he made the gesture toward Trump. “I had two fingers out,” he said. “I’d never do that to the president of the United States.”

Almora with a potential clandestine bird-flip in Oval Office. pic.twitter.com/AwsJx6Z9cT

Did this @Cubs outfielder just slyly flip the bird in the White House? https://t.co/5O4ymjFi7a pic.twitter.com/sb8pZW8jkz