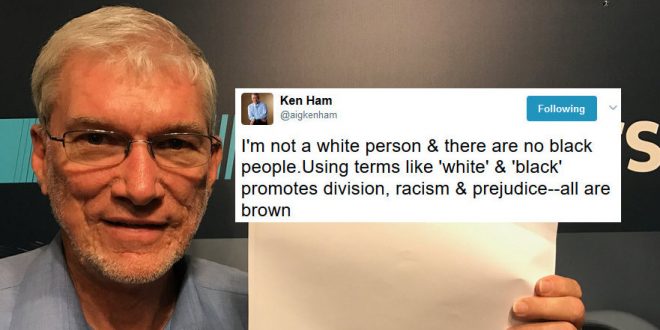 Creationist Ken Ham: There Are No Black People

Did creationist Ken Ham get woke? Not exactly, although on Friday the man behind the Creation Museum and Ark Encounter did his best to take a stand against racism and prejudice by declaring himself to not be a white person. “I’m not a white person & there are no black people,” Ham wrote on Twitter.

“Using terms like ‘white’ & ‘black’ promotes division, racism & prejudice–all are brown.” Ham’s renunciation of his own whiteness was met with instant ridicule by his Twitter followers, who pointed out the hypocrisy of someone who regularly uses religion as a divisive cudgel calling for everyone to overlook racial disparities.

Ham is following up on an October 2016 essay in which he also declared that whites and blacks don’t exist because we’re all shades of brown thanks to that time God murdered everybody because he loved them so fucking much. An excerpt:

From a genetic standpoint, today’s scientists have abandoned the word “race” for humans — and so should everyone else. I urge President Obama, Al Sharpton, Jesse Jackson and others to abandon the word “races” and use “people groups” instead — to emphasize we are all one race, one blood and one family, and get away from any racist connotations.

We should heed what the Bible teaches, namely that God “made from one blood every nation of men to dwell on all the face of the earth” (Acts 17:26). Yes, God’s word declares that all humans are one race, descendants of Adam and Eve. Further, we are also all descended from Noah and his wife.

After the global flood, as Noah and his family left the ark, it was from these eight individuals that all people groups arose. At the Tower of Babel, Noah’s descendants were dispersed throughout the Earth, populating the continents with the same genetic makeup that each of us still carries today.

I'm not a white person & there are no black people.Using terms like 'white' & 'black' promotes division, racism & prejudice–all are brown pic.twitter.com/c3PePVomj5

thanks for the advert, Ken! pic.twitter.com/FlE0GEVeAv

There are also no Christians, Muslims, Jews, Hinuds or Atheists. We are all the same – born without religion.