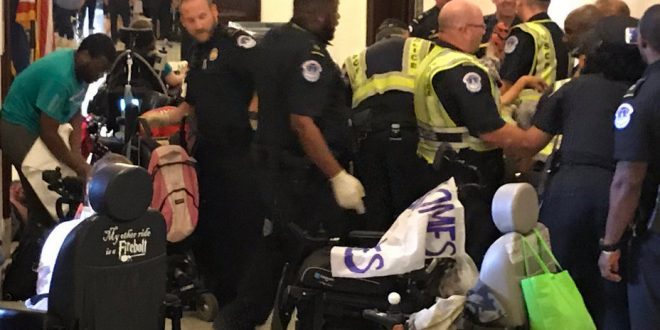 If a picture is worth a thousand words, then I wonder how many a video is worth. In newly surfaced footage posted to Twitter on Thursday, protesters in wheelchairs and wearing medical equipment are carried and dragged away from outside Senate Majority Leader Mitch McConnell‘s office, where they were protesting the GOP’s health care bill.

The protesters, participating in what they called a “die-in” following the release of the GOP health care bill that slashes Medicaid by more than $1 trillion and could make crucial medical services inhumanely expensive for millions, chant “no cuts to Medicaid!” while being carried away.

Police remove protesters, some in wheelchairs, from outside Mitch McConnell’s office pic.twitter.com/dZrdUZGOBU

Here's a protester being literally carried away outside Mitch McConnell's office pic.twitter.com/NKd8E5ofA8

What Mitch McConnell and the GOP think of your objection to their healthcare monstrosity: pic.twitter.com/iNVl1PdwoJ

Previous Obama Blasts Senate Trumpcare Bill As A “Massive Transfer Of Wealth” To The Richest People In America
Next INDIANA: 700+ “Saved By Trump” Jobs Head To Mexico