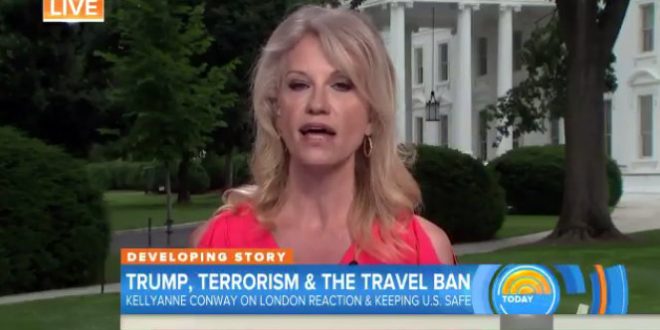 Conway To Media: Stop Being Obsessed With Trump’s Tweets And Report On What He Actually Does [VIDEO]

Presidential counsellor Kellyanne Conway stopped by the Today Show on Monday to go to bat for her boss on everything from terrorism, to Twitter. On that latter subject, Conway got into a rather testy exchange with MSNBC anchor Craig Melvin. Conway suggested that he and his colleagues in the media would do better to spend less time covering the president’s tweets.

“This obsession with covering everything he says on Twitter and very little of what he does as president,” said Conway in exasperation. “That’s his preferred method of communication with the American people” Melvin shot back. “That’s not true,” Conway snapped. “Well he hasn’t given an interview in three weeks. So lately that is his preferred method.”

WATCH: “This obsession with covering everything he says on Twitter and very little what he does as president…” –@KellyannePolls pic.twitter.com/iyS3WnHoxh

Previous John McEnroe Tears Into Margaret Court: Who Gives A Fuck If Tennis Really Is Full Of Lesbians? [VIDEO]
Next REVEALED: Israel’s 1967 Plan To Nuke Egypt