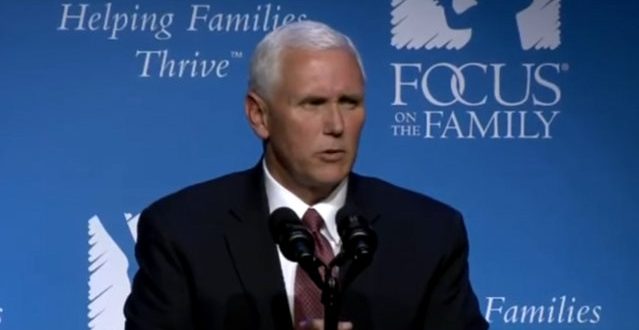 As I reported yesterday, Mike Pence is in Colorado today to keynote the annual convention of Focus On The Family, one of the nation’s largest, most powerful, and most vicious anti-LGBT hate groups. Miranda Blue reports on his speech at Right Wing Watch:

Pence began his speech by delivering greetings from Trump, “a good friend of mine, who’s a leader, who’s a believer, who’s a tireless defender of the values that will make America great again,” and praising firebrand Focus on the Family founder James Dobson as a “friend” and a “mentor.” “I promise you, Focus on the Family, you have an unwavering ally in President Donald Trump,” he said.

Pence assured the group that Trump would stand beside them in defense of “those who are persecuted for their faith, no matter the country they call home or the creed they profess,” a remarkable pronouncement from an administration that is attempting to enact a religiously motivated travel ban and is currently in the process of deporting dozens of Iraqi Christians.

“President Trump has stood without apology for the most vulnerable in our society, the aged, the disabled, the infirm and the unborn,” he added, another jarring statement coming the day after the Senate GOP released a health care bill that could slash healthcare options for disabled people, the elderly and pregnant women.