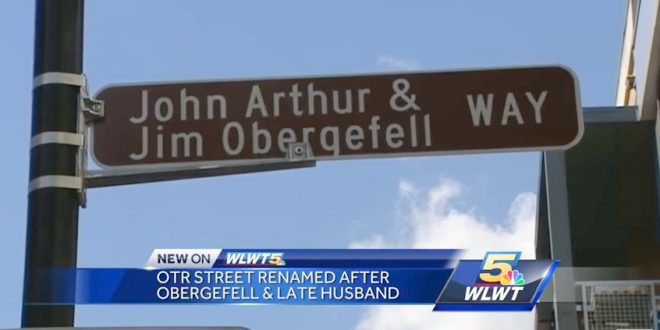 The city honored the Cincinnati native who was the lead plaintiff in the Supreme Court case that declared same-sex marriage legal across the U.S.  City council members voted unanimously Wednesday to give Mercer Street the honorary name “John Arthur & Jim Obergefell Way” after Obergefell, the plaintiff in the case, and Arthur, his deceased husband.

“John always wanted to leave a mark on Cincinnati,” Obergefell said Wednesday. “That was something he really wanted to do. He didn’t have that chance, but now he does. I’m incredibly grateful and I know John would be as well.” Obergefell and Arthur lived in Cincinnati for more than 20 years. They lived on Mercer Street — now named in their honor — at the time of Arthur’s death.