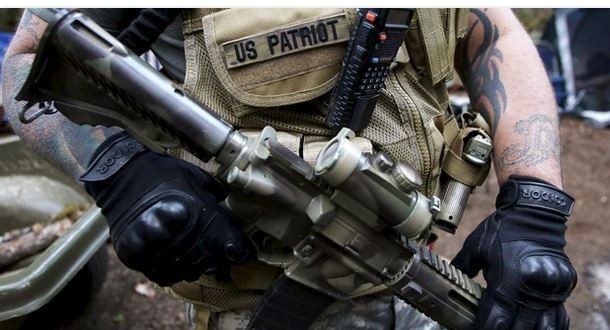 This week various members of the so-called “Alt Right” have been taking shots at Oath Keepers — an antigovernment organization that primarily recruits current and veteran military, law enforcement and emergency first responders — after video surfaced of a Texas militia member putting a neo-Nazi protester in a headlock in a Houston park last Saturday.

The event underscores a growing rift between the “Patriot” movement and other elements on the far right over the former’s apparent lack of racialist sentiment. “We’re not white nationalists. We’re not racists of any kind. And if they show up [at our rally], I am going to personally, physically remove them. Because they are trying to co-opt what we’re trying to do.”

Although Stewart Rhodes, founder and president of the Oath Keepers, has yet to uphold this threat, an alleged member of his organization seems to have done just that. Video footage of a confrontation between a white nationalist protester and a member of “This Is Texas,” a purported affiliate of the Oath Keepers, shows a white nationalist protester being ejected from a group of “Patriots” after one of them snuck up behind the man and put him in a choke hold. The video has elicited strong responses from groups affiliated with the alt right.

You’ll likely enjoy the rest of story, so hit the link. You may recall that in 2015 the Liberty Counsel called on the Oath Keepers to back off their vow to show up in Kentucky to prevent future arrests of Kim Davis by local law enforcement.