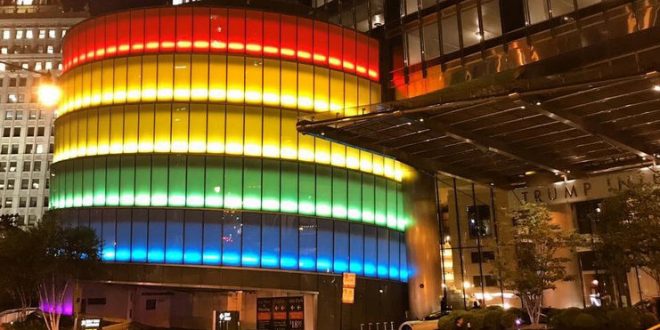 Chicago Pride is this weekend and as seen in a photo tweeted late Tuesday by a local NBC reporter, that night the entrance to Trump International Hotel & Tower was illuminated in the rainbow colors. I couldn’t find any news accounts of this, so early yesterday morning I called the hotel to inquire.

This afternoon I tried yet again and the person with the hotel’s marketing department said, “We’ve been told not to say anything until the PR person puts out a statement.” Noting that NBC reported on the lighting two days ago, I asked when that might be. She said, “I actually don’t know.”

So I’m guessing that either a renegade Trump staffer did the lighting without permission or that the blowback was so immediate, the rainbow display was halted after only one night. I’ll let you know if I ever get a call or if a statement is ever issued.