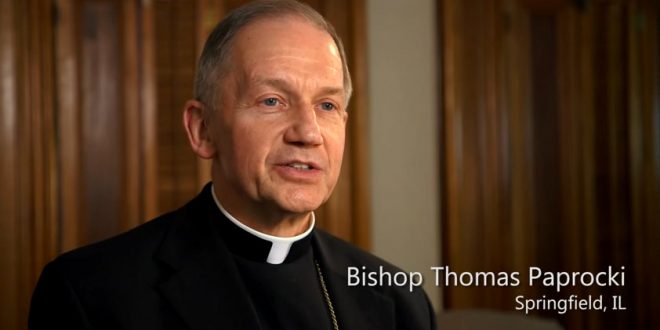 The bishop of the Catholic Diocese of Springfield, Ill., is calling on priests there to deny Holy Communion and even funeral rites to people in same-sex unions unless they show “some signs of repentance” for their relationships before death.

The decree by Bishop Thomas Paprocki also said that people “living publicly” in same-sex marriages may not receive the sacrament of confirmation or be admitted to the Rite of Christian Initiation of Adults, a process by which many converts become Catholic, preparing them for baptism and confirmation.

At the same time, Paprocki said that children living with a Catholic parent or parents in a same-sex marriage may be baptized. But when it comes to same-sex unions, priests cannot bless couples, church property cannot be used for ceremonies and diocesan employees are forbidden from participating, the decree said.

PREVIOUSLY ON JMG: In November 2015, Paprocki held a ceremony to exorcise the entire state of Illinois of its “gay demons” after marriage equality was signed into law. In September 2012, Paprocki told his diocese that if they vote for a Democrat, Satan will take their soul. In January 2012, Paprocki testified against same-sex marriage before the Illinois legislature. Paprocki then ordered all of the priests in his parish to read an anti-gay letter to their congregations. Also in January 2012, Paprocki defended a priest in his diocese who was forced to call 911 to get him out of the handcuffs and ball-gag that he’d put on during some totally-not-gay self-pleasuring. According to Paprocki, the priest was merely engaging in “non-sexual self-bondage” as a means of relieving stress. Uh-HUH. Just for fun, here’s that 911 call one more time. Listen to the priest try to mumble directions through the ball-gag.