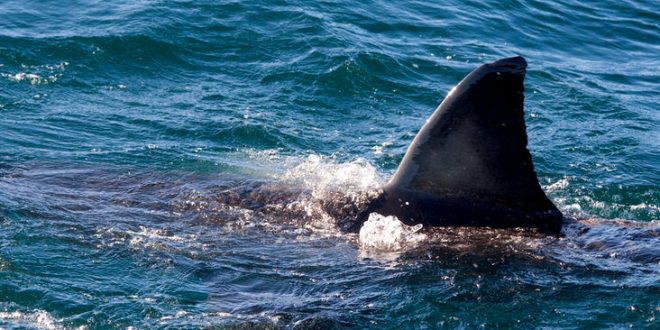 Bear Week is almost upon us so here’s a bit of wildlife news from Cape Cod:

An influx of great white shark sightings has residents and tourists worried about potential encounters in the water, especially during the heart of summer. Senior Fisheries Biologist Dr. Greg Skomal told ABC News the increase in the great white shark population off the Massachusetts coastline is correlated to the gray seal population and that numbers are expected to rise even further.

“We’ve been studying sharks off the coast of Massachusetts for 30 years and our work with white sharks off Cape Cod is relatively recent,” Dr. Skomal said on “Good Morning America.” “The numbers we’re seeing on a relative scale are increasing, in 2014 we counted 80 individuals over the course of the summer and just last summer that went up to about 147. So there is a general increasing trend as more and more sharks recruit to the area.”

As the summer season brings tourists to the Cape it also brings Great White Sharks and the Cape Cod National Seashore is offering tips on how to stay safe. Sharks sightings have increased in the region with the increase of the population of grey seals – their food source.

Seashore officials are reminding the public to not swim near seals, stay close to shore, paddle, kayak or surf in groups, and avoid swimming alone at dawn or dusk. Swimmers should also avoid splashing and not wear shiny jewelry. Great white shark attacks on humans are rare but an incident did occur in Truro in 2012.

OSEARCH has tagged a number of great whites and you can follow their travels via GPS. Some of them even have their own Twitter accounts.

Good to see Crystal actively pinging. She was named by @OCEARCH after the Crystal Pier at @OceanicDining in @WrightsvilleNC -;() https://t.co/ogS8B9NPVX