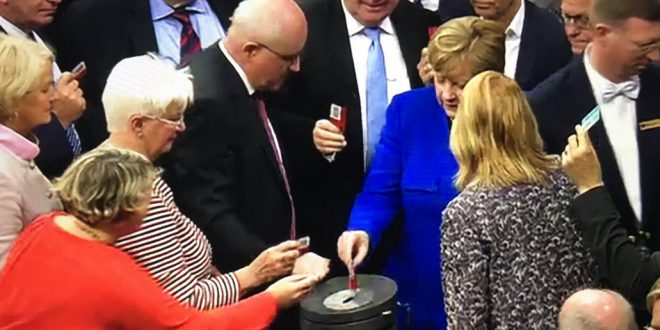 The German parliament, or Bundestag, on Friday passed a bill legalizing same-sex marriages in a snap vote that made it onto the agenda before the summer break after a surprise shift by Chancellor Angela Merkel. The bill passed by 393 to 226, with four abstentions. Merkel herself voted against the bill, although it was comments from her that helped bring it about.

Germany’s approval of homosexual marriages adds it to the growing list of Western countries that allow such unions. Fourteen European countries have now made gay marriage legal, with the Netherlands leading the way in 2001.

“If the Constitution guarantees one thing, it is that anyone in this country can live as they wish,” said Thomas Oppermann, the parliamentary leader of the opposition Social Democrats, while debating the law. “If gay marriage is decided, then many will receive something, but nobody will have something taken away.”

Arnd Bächler, a counselor and addiction therapist at a gay counseling center in Berlin, praised the legislation. “It’s very positive for the self-esteem of gays and lesbians; it’s very important for people coming out, knowing that they have this equality; and it sends a clear message to any homophobic refugees coming to Germany: We have equality here,” he said, anticipating that the legislation would pass.

Approval of same-sex marriage in Germany could build momentum for similar legislation in other German-speaking countries, like Austria and Switzerland, said Katrin Hugendubel, advocacy director of ILGA-Europe, a gay and transgender rights group. She said the developments in Germany illustrated the difference that opposition parties could make.