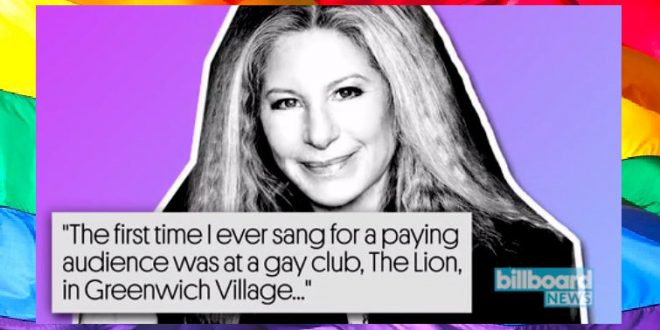 “The first time I ever sang for a paying audience was at a gay club, The Lion, in Greenwich Village. I was 18 years old and had never been in a nightclub before. The gay community supported me from the start, and I will always be grateful. Decades later, I remember sitting in a theater and watching Larry Kramer’s play, The Normal Heart, with tears running down my cheeks.

“It was 1985 and Ronald Reagan was president and it was heartbreaking to know people were dying while he refused to even say the word AIDS. I wanted more people to see this powerful story about everyone’s right to love, so I tried for 25 years to get it made as a movie. No one would touch it, but thank God times have changed.

“Marriage equality is the law and that deserves a toast… to all of us, because we’re all unique and beautiful in our own way and entitled to love and be loved by whomever we choose.” – Barbra Streisand, in a letter submitted to Billboard Magazine’s 30 Days Of Pride feature.