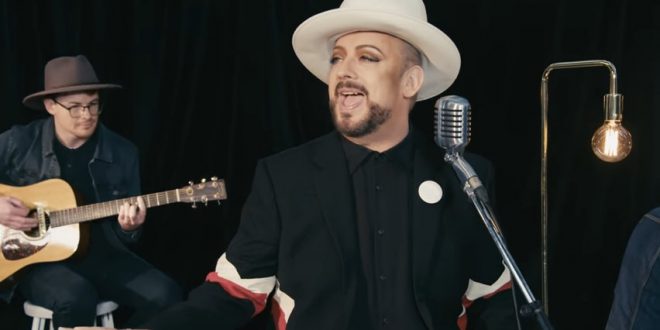 As a coach on The Voice, Boy George is encouraging his artists to find a new meaning when covering iconic pop songs and it seems the Culture Club front man has been taking his own advice. The ’80s pop icon has rerecorded the Village People classic YMCA in order to shine a light on issues important to Australian youth like marriage equality, mental health and youth unemployment.

However, Boy George said that when he was initially approached by YMCA Australia to get involved, he was hesitant. “I thought absolutely not. How could you cover that song?” he said. “The thing about covering songs, you have to get inside the song and see if it works and when I started to listen to the lyrics they were weirdly revealing.” Now, after recording the song as part of the charity organisation’s new campaign, the 56-year-old loves the new, stripped back version. “I started to think, this is going to really work in my shows.”

We’ve reclaimed our song and @BoyGeorge has reimagined it to introduce the YMCA to a new generation. #WhyNot https://t.co/itETzx4Hag