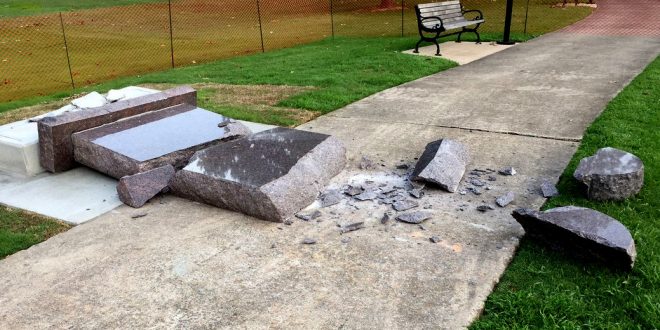 A Facebook Live video shot early Wednesday and posted on an account belonging to a Michael Reed appears to show the destruction of the monument. Arkansas’ monument fell from its plinth and broke into multiple pieces as it hit the ground.

The monument’s installation came due to 2015 bill authored by GOP state Sen. Jason Rapert, who formed a foundation to pay for it. The Arkansas state chapter of the ACLU had vowed to sue to have it removed from the Capitol grounds.

Rapert last appeared on JMG in March of this year when he authored a successful bill calling for a constitutional convention of the states to ban same-sex marriage and abortion.

Rapert previously earned national headlines by calling for the US to rain nuclear bombs down on ISIS and for telling a Tea party gathering that they should no longer “allow minorities to run roughshod over what you people believe in.”

Some idiot in my home state broke all 10 commandments at the same time. He wasn’t Moses and it wasn’t Mt. Sinai. https://t.co/r8hXrJ32JZ

UPDATE: More about the arrested man.

On Oct. 24, 2014, a then-29-year-old Michael Tate Reed was accused of ramming his truck into a Ten Commandments statue of a similar design at the Oklahoma state Capitol in Oklahoma City, the Tulsa World reported. Authorities said he also made threats against President Barack Obama, lit money on fire and walked into a federal building to spit on pictures, the paper reported.

Reed was reportedly diagnosed with schizoaffective disorder after being taken to a mental facility for evaluation following the crash. He was released from Norman’s Griffin Memorial Hospital in January 2015 under an agreement with the Oklahoma County district attorney’s office for continued treatment and therapy.