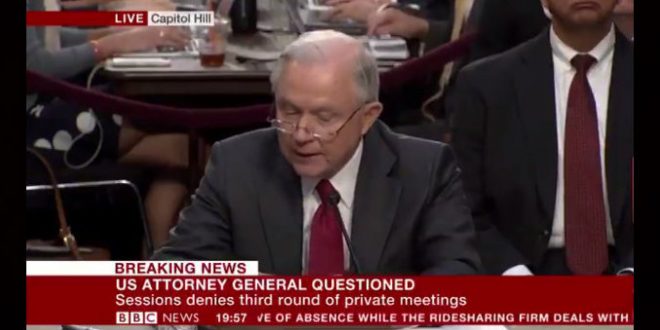 AG Jeff Sessions: Any Suggestion That I Colluded With Russia Is An “Appalling And Detestable Lie” [VIDEO]

Attorney General Jeff Sessions heatedly denied on Tuesday that he had any undisclosed meeting with the Russian ambassador or conversations with Russian officials about the U.S. elections. He vowed to defend his honor “against scurrilous and false allegations.” Testifying at a Senate hearing, Sessions said it was a “detestable and appalling lie” to suggest that he participated in or was aware of any collusion between Russia and the Trump campaign.

In his dramatic appearance before former colleagues, Sessions also contradicted a contention made by former FBI Director James Comey at a hearing before the same panel last week. Comey said that, after an encounter with President Donald Trump in which he said Trump pressured him to back off an investigation into the former national security adviser, Comey “implored” Sessions to make sure he was never left alone with the president again — but that Sessions didn’t respond.

“He didn’t recall this, but I responded to his comment by agreeing that the FBI and Department of Justice needed to be careful to follow department policy” regarding contacts with the White House, Sessions said. The former Alabama senator defended himself against accusations that he misrepresented himself during his confirmation hearing by saying he hadn’t met with Russian officials during the campaign. Sessions argued that in the context of the hearing, “my answer was a fair and correct response to the charge as I understood it.”