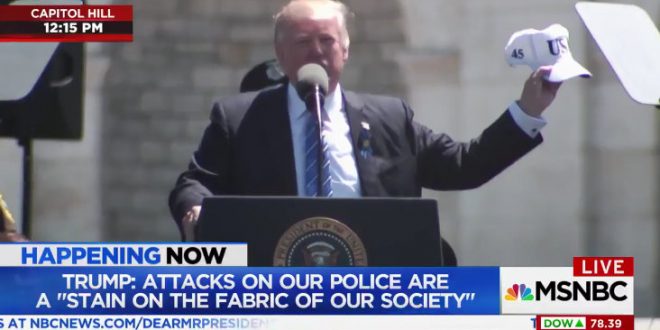 “A very sad thing is many of today’s politicians don’t want to say that, don’t want to talk about that, because it’s not politically correct or they think it might hurt them with the voters. I will say that and I will talk about that proudly,” Trump said at the 36th Annual National Peace Officers’ Memorial Service, held on the steps of the U.S. Capitol Monday,

The president made a point to single out and honor many of the officers slain in the past year, and paused his speech to toss a hat to a child of a Phoenix officer killed in the line of duty. But at an event he described as a “most solemn occasion,” he still couldn’t resist veering into politics time and again.

President Trump tosses a ‘45’ hat to the son of a fallen police officer pic.twitter.com/lzrlndqWWY

@BraddJaffy Am I correct in thinking Trump gave the boy a $2 dollar hat but took away his healthcare?

Fair play to Trump, every day he surprises me. Today he shows the son of a dead police officer how much he cares by throwing him a cheap hat https://t.co/F4IsQcCIhX