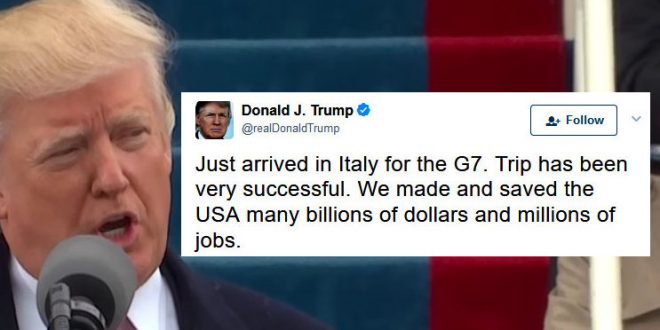 Trump: This Foreign Trip Has Saved Millions Of Jobs

As usual, nobody has any idea what he’s talking about:

President Trump on Friday morning said his first foreign trip has “made and saved” the U.S. “billions of dollars and millions of jobs” as he arrived at his final stop before returning home. Trump has landed in Sicily, Italy, for a G-7 summit after earlier visits to Saudi Arabia, Israel, Rome and Brussels.

It wasn’t immediately clear to what the president was referring — no major financial agreements were announced out of a NATO summit the day before, where he chastised treaty partners over their defense spending levels. But Trump did strike a multibillion arms deal with the Saudis last week.

Just arrived in Italy for the G7. Trip has been very successful. We made and saved the USA many billions of dollars and millions of jobs.

Previous Tillerson To UK: We Take Full Responsibility For Leaks
Next Kushner To Cooperate With FBI’s Russia Probe [VIDEO]